The Field Hotel had a glorious and short history in Stehekin.  Located in what we know as the mudflats in winter, and under water in the summer it's story is one of vision, determination and ingenuity....

In 1892, M.E. Field set out from Ellensburg in a covered wagon heading for the mining district in the Okanogan.  In Coluckum Pass a reach on the wagon broke.  Field was helped in its repair by Dan Devore, a local horse packer in Stehekin.  Dan told Field about Lake Chelan and Stehekin.

In Stehekin, Field came upon George Hall who was building “The Argonaut” Hotel.  Field may have helped finish building the Argonaut.  He then purchased the Argonaut from Hall. 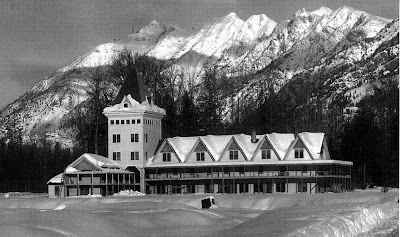 (The following excerpt appears in “The Stehekin Choice, History Edition”)

According to Belle Laroux, Hall’s daughter, the negotiations went something like this:

Field said Hall’s price was too high and Hall replied “That or nothing”.
Field said, “All right, then, nothing!”
Hall answered with “I know plenty who will give me my price”
and Field retorted, “ All right then, get them!”

Then, Belle says, her father went home, dressed in his best clothes and taking an empty suitcase, got into his boat and began to row away as though to find a buyer downlake.  Mr Field watched him until he was nearly out of hearing, then called “George, hoo hoo, George, come back I’ll give you your price”, So papa whipped around, landed and settled the deal. 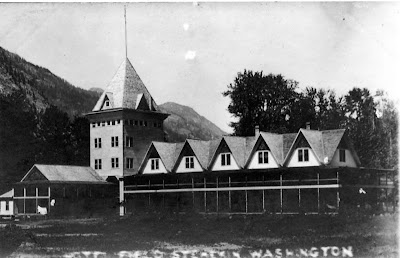 Field spent the next several years turning it into the Field Hotel.  He would float logs down the Stehekin River, gather them into large rafts of logs, had them towed to Chelan, milled into lumber and returned to Stehekin on the Stehekin.

Field Hotel was a destination resort for railroad excursions, drawing people from as far away as New York.

The hotel also lodged miners.  Mining was drawing many people to Stehekin in those days.

Merritt and Mattie Field were very social and likable people and often attended social events downlake.  Merritt was also a representative to the  Washington State Legislature.

Merritt and Mattie Field had 4 children during their days operating the Field Hotel.  The oldest, Olive, would later marry Harry Buckner of Buckner Orchard and lived the rest of her life there.

In 1915 Hotel Field was sold to the Great Northern Railroad Company, in anticipation of the building of the Chelan Dam and subsequent raising of the lake level by 21 feet.  It was then operated by managers for the Great Northern until the actual raising of the lake in 1927 at which time the hotel site was flooded.  Jack Blackenship was one of the last managers of the Field Hotel, and when it was dismantled he salvaged much of the material to build the Golden West Lodge. (Now the Golden West Visitor Center)