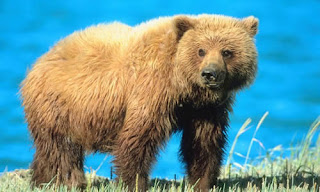 “A decision on whether to bring grizzly bears back to the North Cascades won’t be made as soon as planned.
“Efforts to restore the predators to their former habitat are on hold indefinitely, according to Jack Oelfke, the chief of natural and cultural resources at North Cascades National Park. Along with others, he’s waiting for additional instructions from the Department of Interior and the two lead agencies on the project, the National Park Service and U.S. Fish and Wildlife Service.

"In January, the two groups released a proposal outlining three options for returning a sustainable population of the bears to their former habitat, with a final draft of the proposal set for this fall and an official decision expected by January. Under the proposal, bears from Montana and British Columbia would be brought here and released to live in 9,800-square miles of remote forests covering portions of seven counties stretching from the Canadian border south to Interstate 90.”
MISSOULA, Mont. (AP) —
“Work to restore grizzly bears to the North Cascades Ecosystem has been stopped by Interior Secretary Ryan Zinke's office, a national parks official told a Montana newspaper.
“But Zinke spokeswoman Heather Swift told The Associated Press Tuesday that Zinke did not direct a stop work order on the environmental review. Swift didn't provide further details.
“North Cascades National Park Superintendent Karen Taylor-Goodrich told the Interagency Grizzly Bear Committee last week that her staff had been asked to halt work on its environmental review, the Missoulian reported.
“She said the order also stalls discussions with Canadian wildlife managers who oversee a similar grizzly recovery process in British Columbia.


"We were in the process of evaluating public comment," Taylor-Goodrich said of the stop order. "We're in year three of the process and all the public scoping has been done. The draft EIS went out for public review in spring and we've received about 127,000 comments."
The two links below provide information on the proposed importation of grizzly bears into the North Cascades.
http://stehekinheritage.com/undercurrents/grizzly-bears/
http://www.stehekinheritage.com/